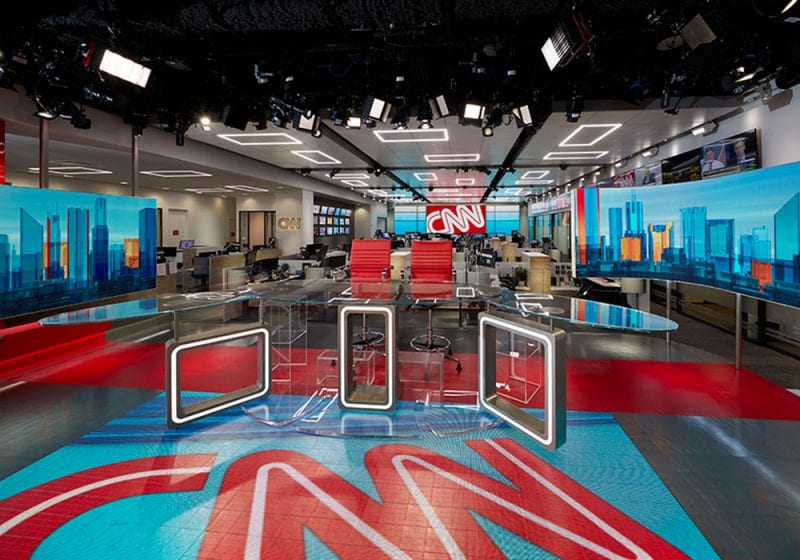 CNN debuted their new headquarters at 30 Hudson Yards in May of 2019.  The Lighting Design Group was honored to be invited to design all four large studios, an open-air newsroom studio, a green screen studio, six single camera flash studios, and the multitude of shows consisting of over 15 hours of programming.  In addition to broadcast design, the LDG Systems Department designed all power and data management for the studios using an ETC EOS control infrastructure with Paradigm supplements.  The design team was led by Executive Lighting Designer Steve Brill, along with Senior Lighting Designer Niel Galen, and Richard Hoyes served as the Systems Designer.

The Newsroom Studio was the first studio premier from the new Hudson Yards headquarters on May 6, 2019 with Early Start hosted by Dave Briggs and Christine Romans.  The hosts sit at a large oval anchor glass desk supported by internally lit rectangular metal frames.  The desk sits above LED video panels built into the floor and ringed by the classic CNN red border.  Behind the anchors are several rows of newsroom workstations with internally lit rectangular shapes, reminiscent of the desk, inserted into the ceiling and a large LED screen in the back of the room.  The programming from the open-air studio continues with CNN Newsroom, Reliable Sources, and Weekend Newsroom.  As with CNN’s other studios, the Newsroom Studio uses its flexible lighting and graphics displayed in the LED screens to transform the studio for each distinct show.  Congratulations to everyone for their hard work on this small but vital studio.