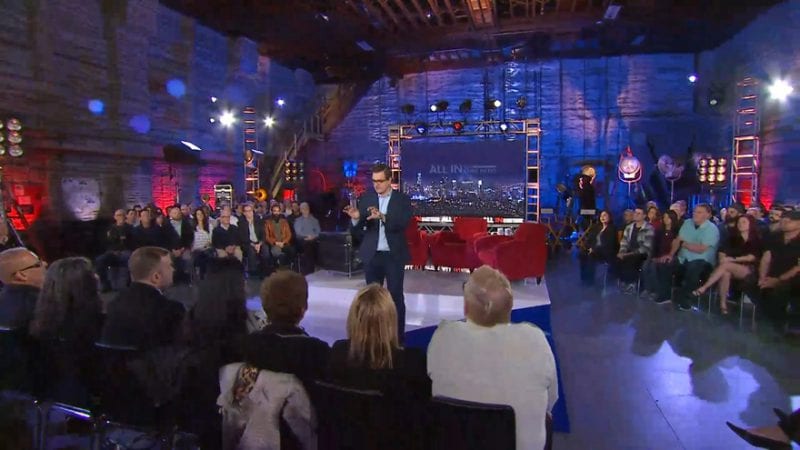 To reflect on the creative, innovative moments of 2020 and to welcome the hope that the New Year brings, Live Design is conducting 31 Days Of Plots. Every day during the month of December 2020, we will highlight a different lighting design, from across theatre, concert tours, corporate events, and more.

Lighting designer Dan Rousseau of the Lighting Design Group shares the plots for All In with Chris Hayes from Los Angeles on March 2. “Situated in one of NBC Universal’s Sound Stages, we had a blank canvas to work from,” says Rousseau. “We wanted the room to be the background for the broadcast and to help identify that we were in LA on a sound stage. Incorporating large film fixtures, toning the walls, and highlighting architectural features created a dynamic background with depth and drama. The color palette was cool to allow the warm glow of the larger lighting fixtures to pop as well as the talent. A careful balance across the three layers—background, audience, and talent—were important because all three elements could be in a single shot at any time.

The lighting rig was ground-supported with truss towers wrapped around the center point of the stage with an LED wall for graphics. The talent positions constantly changed to accommodate different segments and guests. The host had various standups that shifted his background between scenic and audience. “Careful selection of gear such as framing moving lights was necessary for all the different layouts. LED fixtures allowed for quick changes in color,” he explains. “The entire production had only 36 hours to load in and go to air so quick flexibility was key. The most impressive part of the broadcast was the wide shot where you could take in the whole room and see the scale of the setup. However, the show never felt too ‘big.’ This was achieved by highlighting the audience in the same color temperature as the main talent but allowing them to be a touch lower in intensity so that they didn’t appear flat when layered in with the background.”