NBC News unveiled a new and expanded version of Studio N5, one of its Capitol Hill studios that were heavily damaged in a January 2019 fire at the building, on Dec. 12, 2020, as two new shows launched on the network.

The studio is on the eighth floor of 400 North Capitol, a building that also houses studios for Fox and C-SPAN.

NBC opted to tear down a wall and make the 8th-floor studio about 250 square feet larger.

Inside the space, HD Studio – led by Bryan Higgason with Paul Benson and Sid Wichienkuer – created a multi-venue and multi desk studio packed with Planar LED video walls and color-changing set elements as well as multiple references to the “staggered” horizontal bar motif that seems to be a recurring design theme at the D.C. facility — having shown up the header element in the NBC News Washington, D.C. bureau newsroom flashcam position on the 7th floor. 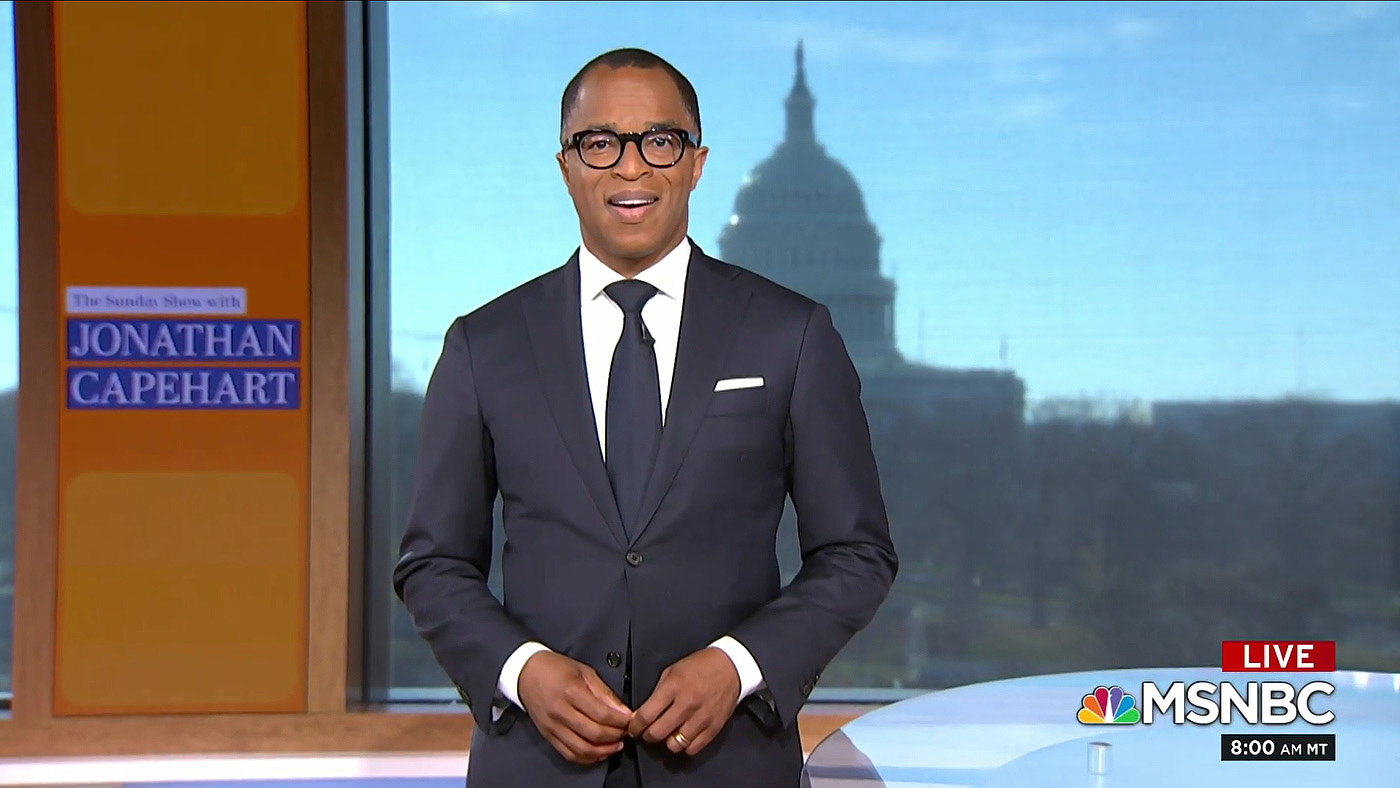 Camera right of the window is a video “alcove” that includes the intersection of two perpendicular video walls, while the left and right side edges feature”wraparound” corners. 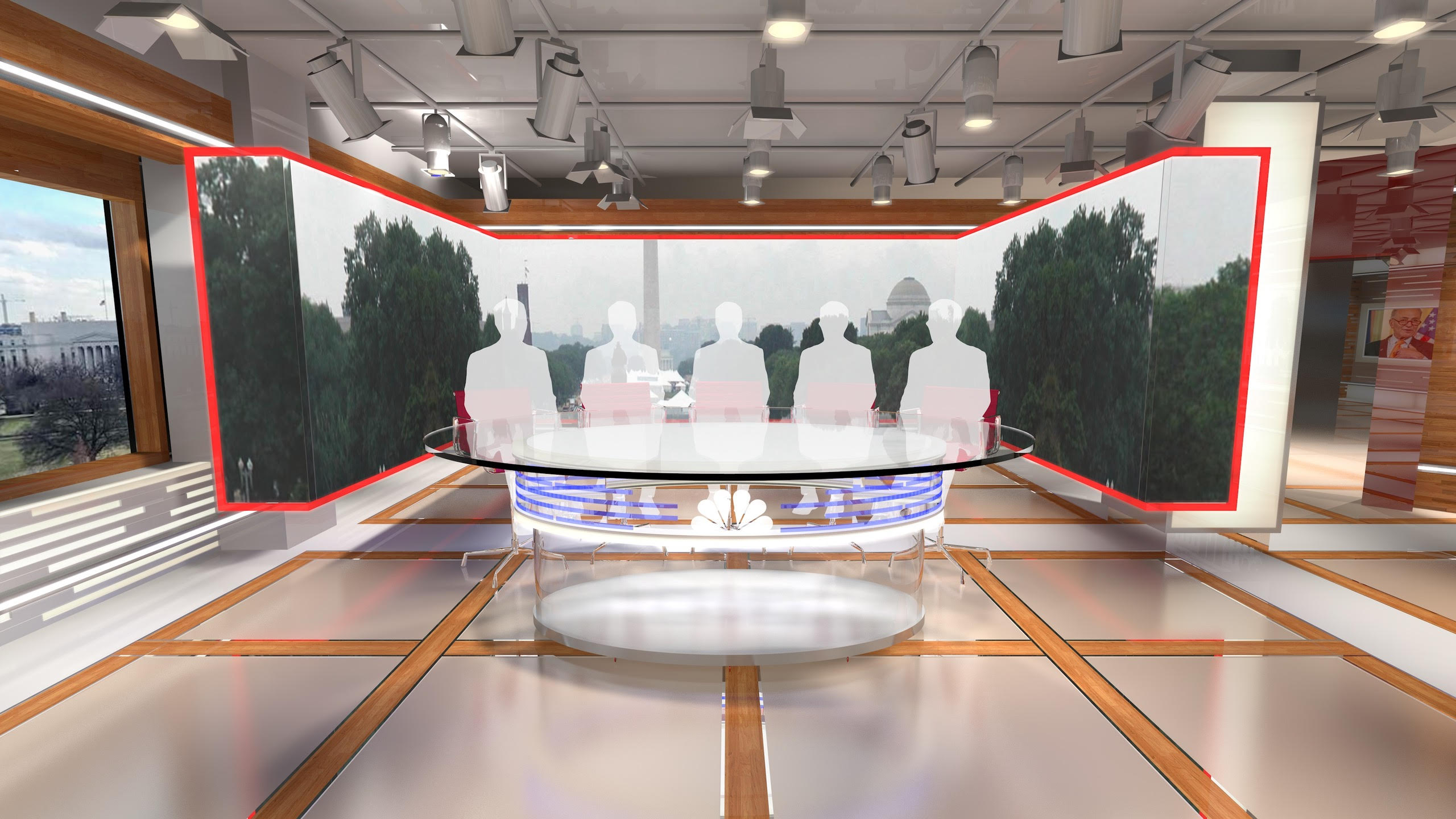 The one nearest the window has the advantage of being able to display graphics or branding on the narrow vertical strip, forming, in a sense, an LED mullion.

When shot this way, this allows for branding and a real, live view of the Capitol, like was done on both “The Cross Connection” and “The Sunday Show,” the first two MSNBC shows to use the space. 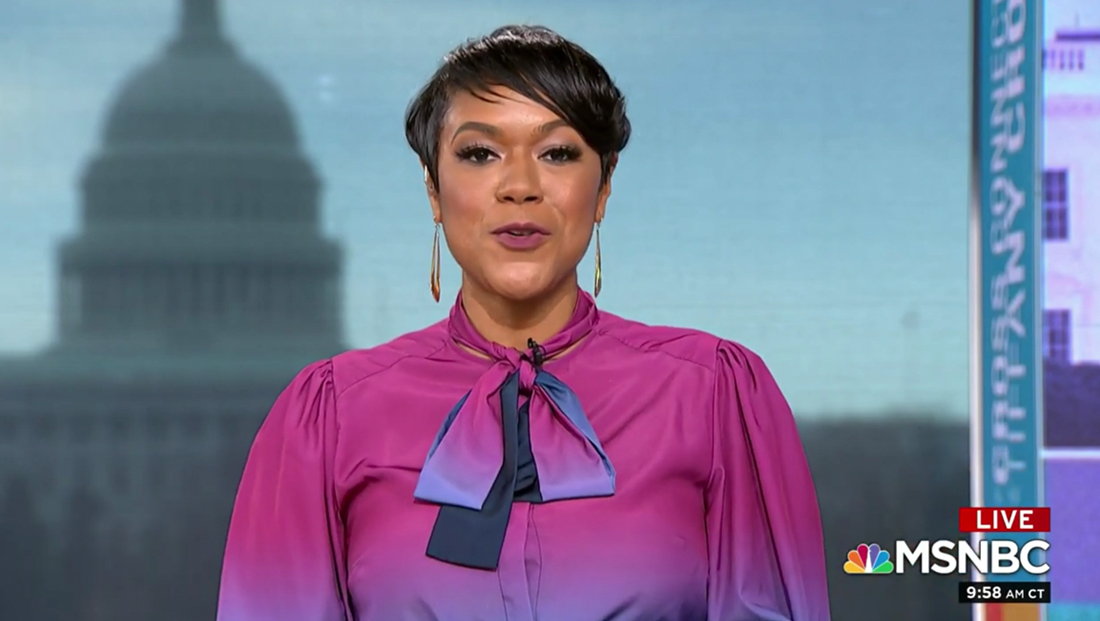 In this shot of ‘The Cross Connection,’ anchor Tiffany Cross is shown with a real window view of the Capitol behind her, with the far edge of the wraparound LED installation on the right side of the screen — making it possible for NBC to brand this impressive view. 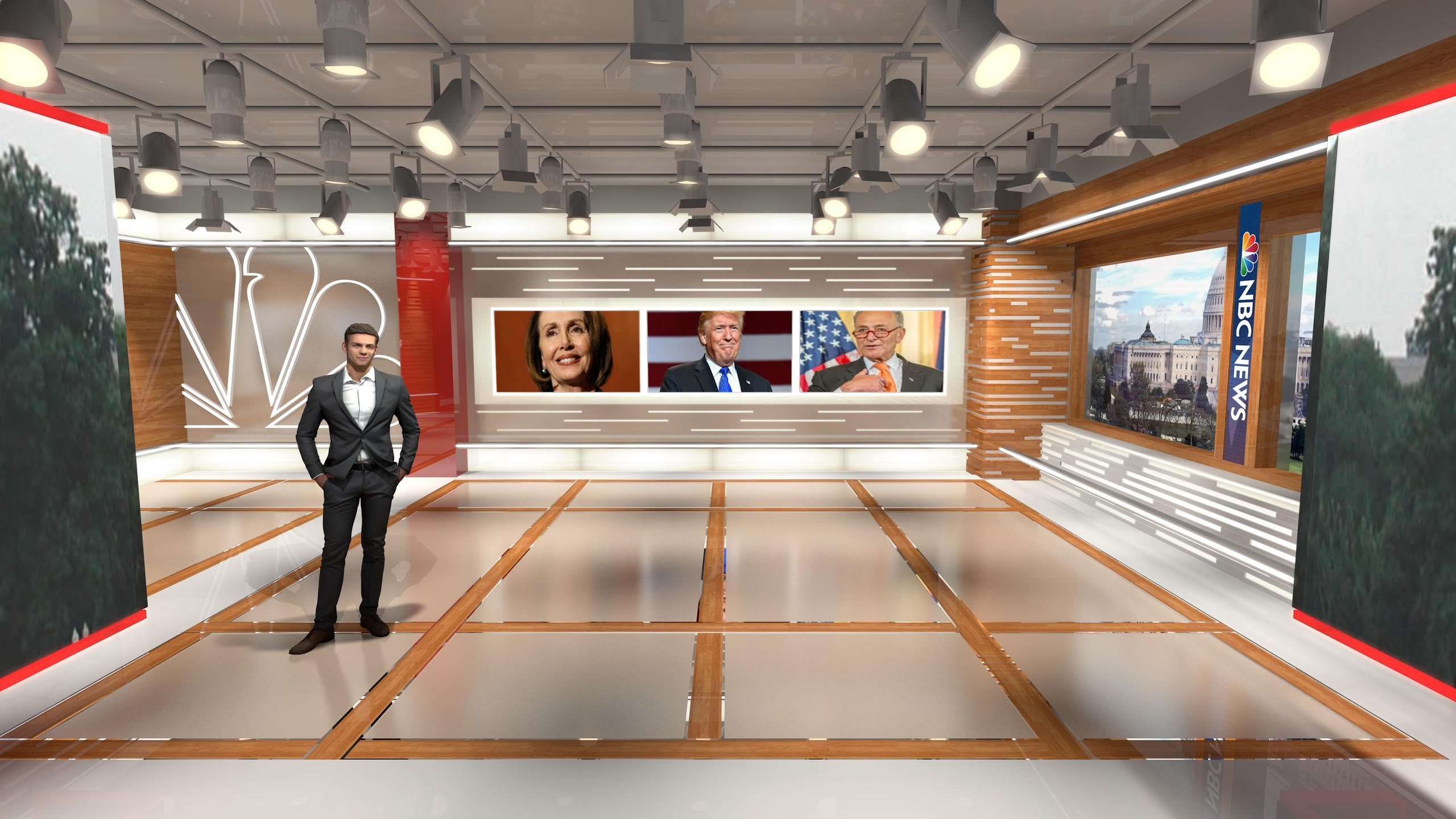 On the opposite side of the window is a triptych of large-screen monitors with internally lit frames and surrounded by a metallic wall with horizontal accents. The corner between this wall and the windows also features a large square column created with wood tones and additional horizontal accents. 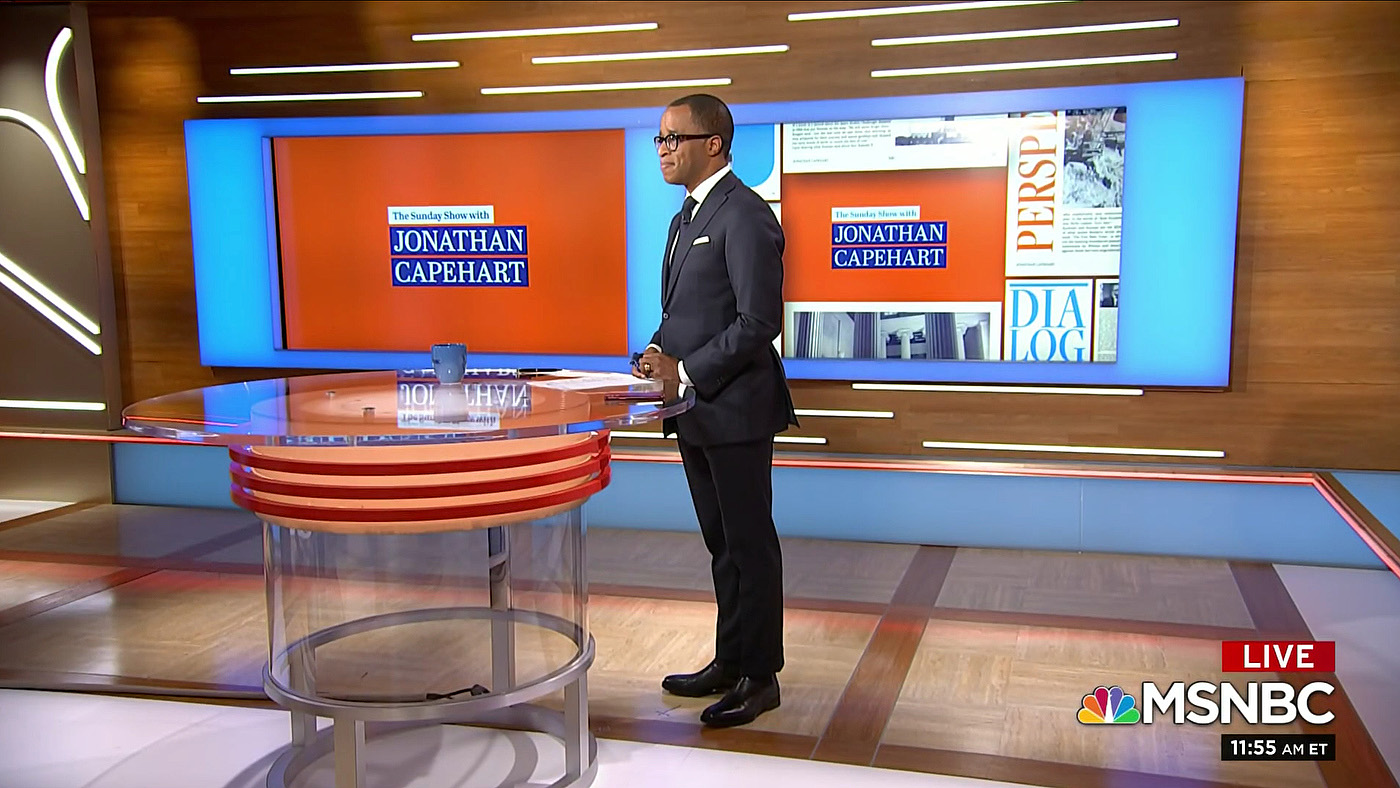 The two-panel venue inside of Studio N5.

There is then a bright red structural column that segues to a final venue — a two video screen array with a similar frame and wood wall with internally lit accents and flanked by two flat, metallic walls with two edge-lit installations of oversized NBC peacockoutlines.

The studio also includes at least two desks that can be wheeled around the floor that features a grid of darker and lighter wood tones.

The studio’s pod-shaped desk features a metal and glass base with a color-changing ring with three thinner red bands in front of it.

The larger desk features frosted banding and the NBC peacock (likely selected so it could be used across NBCUniversal properties if needed).

The video walls also obviously give the space flexibility for multiple NBCU brands and shows to use the space, including ones that temporarily need to originate from Washington.

Saturday “Today” has been originating from Washington during much of the coronavirus pandemic using the set originally built for “Meet the Press,” which has played host to other MSNBC shows after the fire, though this was reduced as the pandemic worsened.

The pod can be leveraged for both a single person in a standing or seated position (albeit with a higher chair). It likely could also be used for small, two-person interviews (though likely not in the era of social distancing).

Meanwhile, the larger desk can fit up to five but was also used on the debut shows for a single anchor.

In addition to N5, there is also an empty studio on the floor below. NBC is leasing space on both floors for studios and workspaces — with the 7th floor being additional space it picked up after the fire. The network also occupies part of the first floor with what will be the new home of “Meet the Press” as well as additional office space.

That studio is expected to debut in January, according to sources.

NBC first announced plans for the expanded presence in the building in July 2019. The network’s old bureau and studios for “Meet the Press” and inserts were located inside the same building as its owned NBC and Telemundo stations.

Sept. 18, 2020, was the last day of most network operations at the Nebraska Avenue building (namely “Meet the Press” and Saturday “Today” continued to use the latter’s studio).

The “MTP” studio was also used for shows displaced by the fire, though much of that changed when the coronavirus pandemic hit.

On Sept. 21, 2020, NewscastStudio obtained an internal memo from NBC News management that also included a photo of one of the new work areas built inside the North Capitol Street building. That workspace is on the first floor, according to sources.