Nicaragua’s Masaya Volcano, which belches toxic gas from its lava lake crater, was aptly named “The Mouth of Hell” by a 16th century Spanish friar. Photo by Steve Brill/LDG

Steve Brill of New York City-based The Lighting Design Group got the call. Nik Wallenda of The Flying Wallendas had already crossed on tightrope Niagara Falls and the Grand Canyon, among other death-defying feats. Now Nik was training for his highest and longest walk, on a one-inch wire across 1,800 feet over an active volcano. For live TV.

Brill’s first reaction was, “Wow, how the $%# am I going to light a volcano?” Second reaction: “In Nicaragua?” Third reaction: “What an amazing project!” The dick clark productions event, Volcano Live! With Nik Wallenda, was broadcast on ABC TV on March 4, 2020, just before the Covid-19 lockdown. It’s not a spoiler alert saying he was successful. But PLSN is interested in the story behind the story. 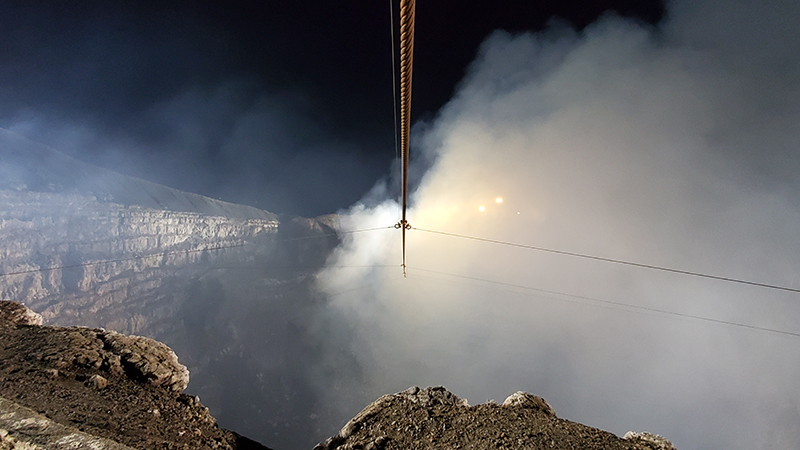 Brill started on the project in December 2019, but pre-visualization could not accurately render something this huge, so he trekked to the volcano for a site survey. The Masaya Volcano is a hot tourist destination. Just 14 miles outside of Managua, Nicaragua, it’s got its own website with live webcams, a cell phone app and top ratings on Tripadvisor. It’s also got its own official title: “The Mouth of Hell.” A 2,000-degree lake in its crater bubbles with molten lava, churning out clouds of toxic gases with a sulfurous stench “a whole lot worse than rotten eggs,” Brill says. Because of poisonous fumes, visitors are restricted to a 10-to-15 minute window of time near the crater. But it doesn’t stop the vortex of vultures circling the scene.

Some observers of the stunt, including these volcano vultures, were disappointed with ABC’s safety harness mandate.

A volcanologist was brought in early to certify that the ground’s stability. Some locations were not permitted. Major equipment constraints were weight and power. They needed to go as big as possible. Every lighting position needed a generator and a backup, and it all required fuel. Yet the fixture type chosen would be dictated by the logistics of getting it to the location.

Brill carried a few fixtures to test how they would take light through the “never-ending gases and smoke.” There was lots of calculating and recalculating. Aided by precision rangefinder binoculars to measure distance to a target, Brill could determine the huge throw from possible fixture locations.

Because of all the drones and fixed camera positions, the team determined the need for 360 degrees of lighting. “The ground around Masaya is unstable, so there were many weight calculations. The last thing we wanted to do was to dump a Musco truck or an 18k HMI into an active volcano,” Brill notes.

Challenges required off-the-chart decisions. “How much light do you get from an 18K HMI at 1,800 feet while shooting through a dense cloud of sulfur dioxide gas?” Brill asks, amused. “I couldn’t find any chart that would tell me that! We calculated as best we could, created a scale light plot using Google Earth, and had to trust our instincts.”

The first big consideration was Nik. The aerialist needed to see the tightrope while cameras needed to see him. “I understood the need to keep the light out of his eyes, so we kept all fixture positions at least 30 degrees off his line of sight. He is putting his life on the line here.”

With no way to accurately focus the lights, they had to trust calculations and estimate. “Try to find somebody to go out on the tightrope with a light meter to aim these fixtures!” Brill jokes.

The LD chose three 18K HMIs as “followspots.” “An 18K on full spot at 1,800 feet produces around 15 foot candles of light,” Brill explains. “To compensate, and to give us a margin of error, every area was lit with multiple fixtures.”

The second consideration was: how to light the volcano. Each side measured roughly 1,800 by 600 feet, or more than a million square feet. Multiply by four sides, and they were tasked with lighting over 4 million square feet of surface area.

Showcasing the active lava lake — which is “not as bright” as one would think — was another balancing act, creating a bright enough image for the cameras to make level without overwhelming the image of the lava. They also wanted to light the volcano walls to bring out the natural beauty of the rock.

Finally, lighting was needed for safety. This New Yorker wasn’t prepared for a nighttime sky with no light pollution. “It is a darkness I had never seen before,” he says. “You couldn’t see five feet in front of your face. We needed to ensure the lights would stay on no matter what. Our system was designed with six distinct locations, each with a separate power source and backup. If we lost any one source, we would still have light, on and off air.”

In the end, they specified more than 100 HMI fixtures, ranging from 6Ks on a Musco truck to 12Ks on Condors and 18Ks on crank-stands to cover all their bases. 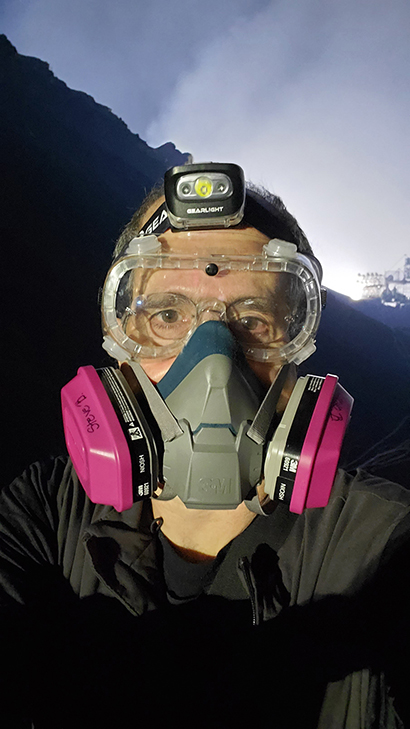 With plots finalized by the end of January, the gear shipped early February. It traveled by truck to Miami, by boat to Nicaragua, and trucked again for a seven-hour trip over land to Masaya. Access was a major issue. In the rugged area, little could be hand-carried.

Lava, toxic gases and weather forced “The King of the High Wire” and the crew to wear goggles and a mask. “We had planned to focus lights on three consecutive evenings, but on one night the wind was so strong we couldn’t see anything to focus on. Remember, we were trying to focus on the far side of the volcano, 1,800 feet away. There was no way to accurately focus on the wire, so we had to use our best judgment.”

And then the wire walk started. During those breathtaking 31 minutes and 23 seconds, Brill had his usual worries during any live broadcast. He worried about the stability of the installation. But his biggest worry was Nik. “There was no rehearsal,” the LD explains. “Once we saw him on the wire, I breathed a sigh of relief. He looked great. Of course, not as big a sigh of relief as when he hopped safely off the wire at the finish!”

No word on what Wallenda will conquer next. 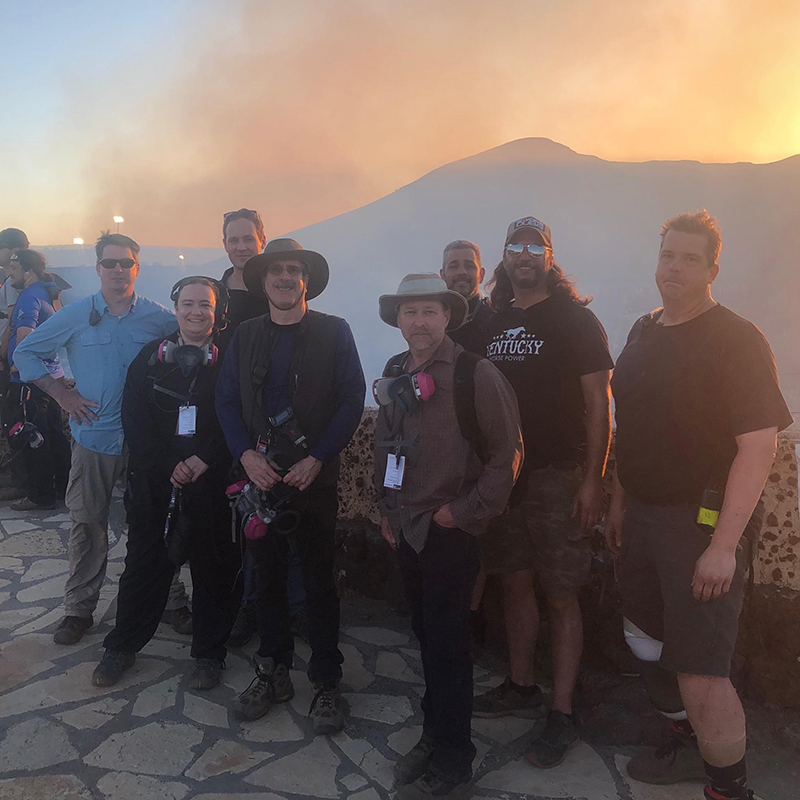 Onsite at Masaya with LD Steve Brill and his crew, taking a goggles and mask break when the wind blew the other direction.